Why efforts to fight corruption hurt democracy: Lessons from a survey experiment in Nigeria 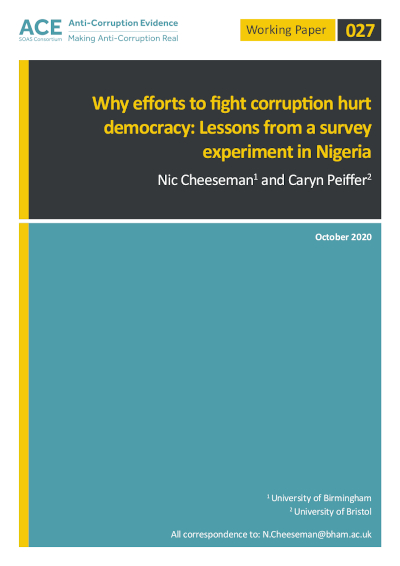 Most anti-corruption programmes include an awareness-raising element, where significant resources are spent on trying to raise the profile of corruption and anti-corruption. These types of efforts have been categorised as ‘demand-side’ anti-corruption interventions. Demand-side initiatives aim to widen the socio-political space available for citizens to demand better control over corruption and work to empower citizens’ groups to do so. So, while advocates of such efforts hope that by raising the profile of corruption and anticorruption the public will be more motivated to resist and report corruption, an additional aim for many is that awareness-raising will make the public more willing to hold their elected officials accountable for any corrupt transgressions.

In this study we contribute to the literature by examining for the first time whether such messaging might also unintentionally influence political attitudes and beliefs – such as the willingness of citizens to defend democracy and comply with socially beneficial norms such as tax payment. Democracies in systemically corrupt contexts face specific challenges. The presence of widespread corruption and/or acute corruption scandals can signal to citizens that those in power cannot be trusted, that the democratic nature of the political system is compromised, and that citizens’ taxes are being stolen. It may therefore be the case that by priming citizens to think about corruption, anti-corruption messages unintentionally have a negative impact on wider political attitudes like perceptions of the quality of democracy and willingness to vote for ‘anti-corruption’ candidates.

This paper uses data from an original survey experiment conducted in Lagos, Nigeria in 2019.