The unintended consequences of anti‐corruption messaging in Nigeria: Why pessimists are always disappointed 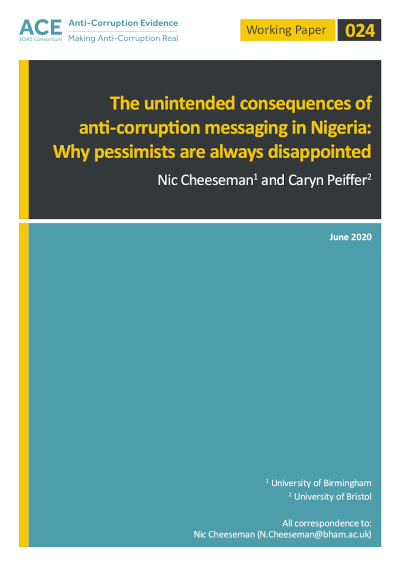 A recent strand of quantitative research has suggested a deeply concerning finding: by making individuals aware about the pervasiveness of corruption, anti-corruption messages may make citizens more despondent and undermine their willingness to fight back (Peiffer, 2017; 2018). In other words, telling people about corruption may make the fight for a ‘clean’ government seem helpless. It may exacerbate the notorious collective-action problem in this area and encourage individuals to ‘go with the flow’ rather than to ‘stand against the tide’. More worrying still, some studies have suggested that this is not only the case for messages that explicitly stress how pervasive corruption is: even much more careful, targeted and up-beat statements that emphasise anti-corruption efforts may have this effect (Peiffer, 2018). This is of profound importance for policy-makers, because it suggests that any campaign that primes the public to think about corruption may do more harm than good.

In this paper, we report the findings of new research conducted in Lagos, Nigeria, in 2019. We administered a survey to 2,400 participants and played a ‘bribery game’ with 1,200 participants in order to better understand how individuals respond to different kinds of anti-corruption messages. More specifically, this paper pushes the debate forwards in four ways: