The Political Economy of ‘Specialism’ in Tanzania: How to make Export Processing Zones work via conditional special licensing 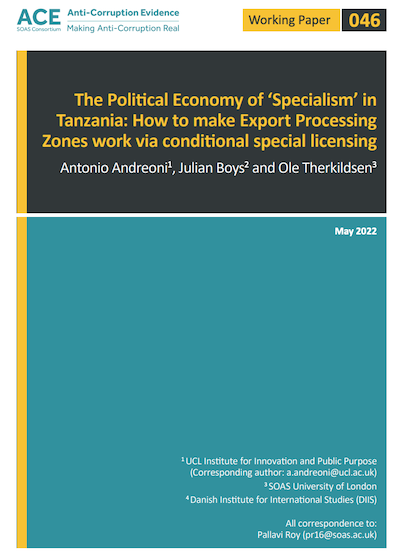 Industrial policies increasingly rely on the use of special regimes which provide fiscal, regulatory and other advantages to firms that invest in a particular geographic area. Such special investment regimes, particularly Special Economic Zones (SEZs) and free zones, were adopted widely in Africa from the 1990s, coinciding with the liberalisation of trade and investment regimes following the end of the Cold War. In 2019 there were 237 SEZs in Africa. The main reason for establishing SEZs in Africa is to promote investment in strategic sectors such as manufacturing, to boost employment and exports, and generally to accelerate the process of economic development.

In this paper we focus on Tanzania’s experience since 2002 with Export Processing Zones (EPZs) – a sub-category of SEZ focused on export-oriented manufacturing. Between 2008 and 2019, the Export Processing Zones Authority (EPZA) issued licences for 148 foreign and domestic firms – some of them located in designated zones but a large number located across the country as stand-alone companies. In particular, we analyse the challenges and vulnerabilities in the governance of the tax incentives of mainland Tanzania’s special EPZ regime in the context of regional integration and the customs union of the East African Community (EAC). Our analysis is based on a newly developed firm-level dataset for 148 companies, reviews of existing documents and analyses, available secondary data of varying quality, and more than 30 interviews over a two-year research endeavour.

Our work suggests that the performance of Tanzania’s EPZ regime has generally failed to lead to meaningful industrialisation despite some successful results at firm level. Research on other African countries suggests that several of them have had similar experiences. The special regimes have often fallen short in terms of export dynamism, employment creation and linkage creation. More specifically we have identified 10 sources of vulnerabilities to corruption and related rent misallocation and rent-seeking processes. In addition, we have shown how these processes cut across the many institutions in charge of running the EPZ scheme as well as the firms that are operating under this special regime. We have also highlighted how these corruption vulnerabilities are interdependent and reinforce each other in a complex bundle of processes, interests and trade-offs.

In short, regulatory inconsistencies and ineffective tax incentive governance, alongside EPZA’s willingness to receive more investments based on loose licensing criteria, can attract companies with the wrong mix of capabilities and incentives (adverse selection). This has made the enforcement of Tanzania’s EPZ special regime more challenging and reduced its outcomes. A feasible anti-corruption strategy therefore requires more than conventional analyses may suggest; it is not sufficient to seek to improve the policing of firms, or to attempt to fill the administrative holes in the system, or to increase capacity building (although some such measures may be relevant).

Rather, a feasible anti-corruption strategy should start from reducing the interests of the firms themselves in misusing the EPZ licensing scheme. For a capable firm with appropriate initial investments and technological and organisational capacities, which is interested in the real benefits offered by the scheme and that has routes to export markets, it would be against the firm’s own interest to concentrate on rent seeking. Such enterprises have a different option: to make profits by conducting legal activities within the scheme, whether they are stand-alone firms or are located in industrial parks.

We therefore propose to introduce a simple criterion, which we call conditional special licensing. An EPZ licence is granted on the condition that the firm has secured contracts from international buyers ex ante. This ex-ante conditionality reduces the burden of enforceability at all levels of the system and throughout the processes described above. Moreover, we propose that distressed EPZ firms that are struggling to meet the 80% export condition (which is a central EPZ condition) be given an exit option or a parallel pathway whereby they are supported while they re-focus their activities towards the growing ‘domestic’ markets of the EAC. Finally, the tax and non-tax incentives for the presently non-operational SEZ scheme should be revised and should target companies with limited export capability, which are more interested in domestic and regional markets – if harmonisation and agreement can be reached under the EAC Common Market.