The political economy of ‘scarcity’ in East Africa: a case study of sugar production, smuggling and trade in Tanzania 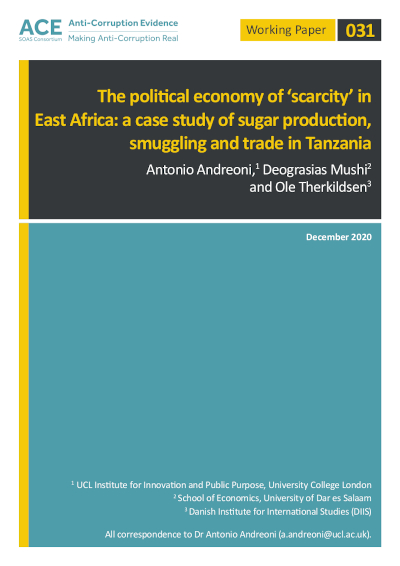 Sugar scarcity is a widespread phenomenon across the African continent. National governments cover the so-called ‘sugar gap’ – the difference between domestically produced sugar and national consumption requirements – by managing imports of sugar from major world producers and exporters. Consequently, sugar production and trade are at the centre of the political economy of industrialisation across Africa and its sub-regions. Regulatory measures such as subsidies, import duties, and special licensing and tariff regimes operating at the domestic, bilateral and regional levels are major sources of rents and often result in rent-seeking behaviours and corruption both along the value chain and across the political spectrum.

To address such problems of corruption in the sugar industry in Tanzania and other developing countries, we argue that the ‘political logic of scarcity’ must be understood. With this concept we highlight that, first and foremost, the fundamental constraining processes and the major sources of corruption stem from the fact that rents are intrinsically linked to scarcity; second, that rent-seeking is both about exploiting the existing real scarcity as much as actively creating and reproducing both real and artificial scarcity. These three processes are commodity-industry specific. They can also operate in parallel and be contested by different powerful groups over time. More importantly, the micromanagement of these interrelated rent processes by powerful groups leads to extremely volatile domestic markets, which in turn makes domestic productive investments difficult. Without such productive investments, scarcity cannot be overcome, and corruption remains rampant.