The EFCC and ICPC in Nigeria: overlapping mandates and duplication of effort in the fight against corruption 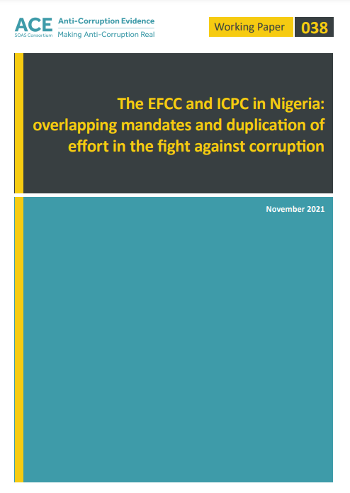 Corruption remains a major hindrance to Nigeria’s development, despite efforts made by successive regimes to combat it. In the absence of institutionalised anti-corruption agencies (ACAs) during military rule, military decrees were used in the fight against corruption. The return to civil rule in Nigeria in 1999 represented a new chapter, with Acts passed via the National Assembly to establish ACAs as part of a broader international development agenda. The global campaign against corruption gave further impetus to the institutionalisation of ACAs in Nigeria, through anti-corruption conventions and protocols such as the United Nations Convention Against Corruption (UNCAC) in 2005 (UN, 2005), and the African Union Convention on Preventing and Combating Corruption (AUCPCC) in 2006 (AU, 2006).

Upon assumption of office in 1999, President Olusegun Obasanjo committed to combat corruption in line with international standards. His administration established the Independent Corrupt Practices and Other Related Offences Commission (ICPC) in 2000 and subsequently the Economic and Financial Crimes Commission (EFCC) in 2004. The latter has recorded some progress – for example, between 2003 and 2007, the EFCC secured 270 convictions including the successful prosecution and conviction of a former governor in Nigeria. Financial assets were also recovered, including around 207 trillion Nigerian Naira (NGN) (US$505 million) looted by General Sani Abacha (Okonjo-Iweala, 2012).

Despite pockets of progress, however, the anti-corruption crusade in Nigeria is beset with various obstacles – not least structural challenges that stem from the overlapping functions of various ACAs, which undermines their effectiveness and efficacy. Against this backdrop, this paper examines the overlap between the ICPC and the EFCC in particular.