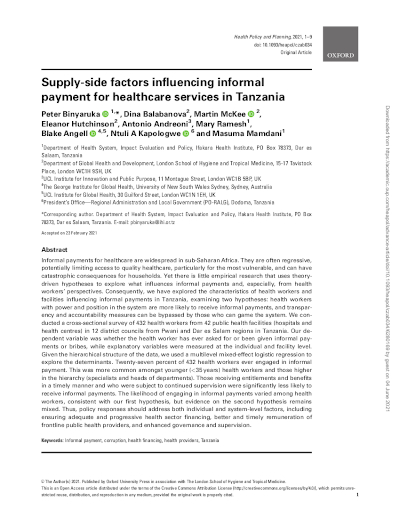 Informal payments for healthcare are widespread in sub-Saharan Africa. They are often regressive, potentially limiting access to quality healthcare, particularly for the most vulnerable, and can have catastrophic consequences for households. Yet there is little empirical research that uses theory-driven hypotheses to explore what influences informal payments and, especially, from health workers’ perspectives. Consequently, we have explored the characteristics of health workers and facilities influencing informal payments in Tanzania, examining two hypotheses: health workers with power and position in the system are more likely to receive informal payments, and transparency and accountability measures can be bypassed by those who can game the system. We conducted a cross-sectional survey of 432 health workers from 42 public health facilities (hospitals and health centres) in 12 district councils from Pwani and Dar es Salam regions in Tanzania. Our dependent variable was whether the health worker has ever asked for or been given informal payments or bribes, while explanatory variables were measured at the individual and facility level. Given the hierarchical structure of the data, we used a multilevel mixed-effect logistic regression to explore the determinants. Twenty-seven percent of 432 health workers ever engaged in informal payment. This was more common amongst younger (<35 years) health workers and those higher in the hierarchy (specialists and heads of departments). Those receiving entitlements and benefits in a timely manner and who were subject to continued supervision were significantly less likely to receive informal payments. The likelihood of engaging in informal payments varied among health workers, consistent with our first hypothesis, but evidence on the second hypothesis remains mixed. Thus, policy responses should address both individual and system-level factors, including ensuring adequate and progressive health sector financing, better and timely remuneration of frontline public health providers, and enhanced governance and supervision.

Read the Journal Article (published in Health Policy and Planning).