Lost in trade: towards a red-flag system to target trade misinvoicing and tax evasion in Tanzania 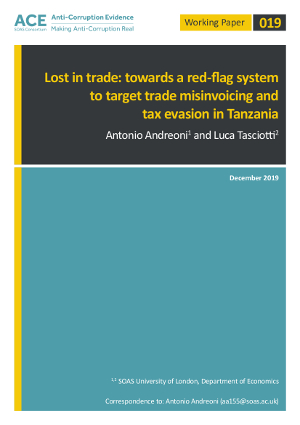 Trade misinvoicing and the resulting tax evasion are profoundly intertwined with the political economy of corruption and the development trajectory of Tanzania. Since the 1990s – the so called ‘Ruksa’ (opening up) period – and then with the establishment of the East African Community (EAC) Customs Union since 2005, the management of trade, tariff schedules and smuggling have opened up several opportunities for rents capture, rent-seeking and illicit financial flows. Trade misinvoicing can take different forms, the main ones relating to the underreporting of commodity flows to avoid the payment of tariffs set for imported goods, and overreporting as a way of moving capitals out of the country. Existing evidence suggests that the size of underreporting – i.e. the difference between what the importing and exporting countries declare – is positively correlated with the tariff rate set in the importing country. This paper contributes to the existing literature by providing new longitudinal evidence on the scale of corruption in trade misinvoicing (both underreporting and overreporting) and new econometric analyses of the critical channels and factors driving trade underreporting in Tanzania under different tariff regimes. We found that between 2013 and 2017, the cumulative value of trade underreporting amounted to over US$10 billion.