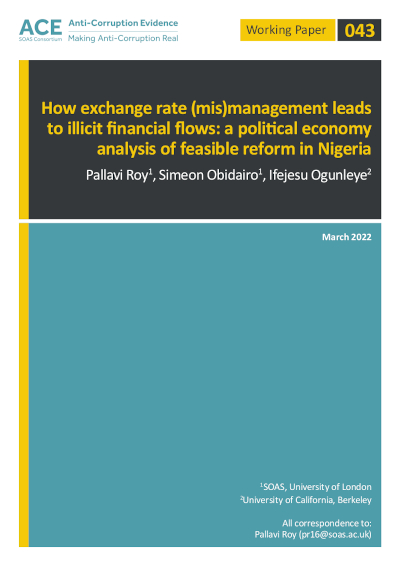 Illicit financial flows (IFFs) remain a major issue in extractive economies such as Nigeria. Furthermore, strict capital controls and fixed exchange rates can often provide incentives for IFFs in low governance or resource-constrained economies. This paper explores the
relationship between the exchange control regime and IFFs in Nigeria.

Exchange rate regimes are often a tool in the arsenal of low and middle income countries like Nigeria that are working to encourage economic growth and development.
Interventionist policies such as pegged, step-locked or fixed exchange rates are commonly adopted by governments in a bid to incentivise certain sectors. However, this policy tool requires political discipline and enforcement capacity to ensure that it is effective and that it is not distorted for corrupt or illicit purposes.

The exchange rate regime in Nigeria is managed by the Central Bank of Nigeria (CBN, or ‘the Bank’), which is responsible for maintaining price stability and exchange rate policy to safeguard the value of the naira. The role of the CBN and how it fulfils its functions has evolved over time in response to political and financial pressures and influence. Although the legislative framework developed in Nigeria has sought to establish independence for the Bank, it contains reporting obligations to the President and grants the powers of appointment for the Governor of the CBN to the President. Exchange rate regimes have been adopted haphazardly and they have often reinforced mechanisms for rent-seeking behaviour by the political and financial elite, leading to significant corruption and IFFs. In order to maintain a stable exchange rate, the foreign exchange market has had to be closely managed, with the number and value of transactions processed officially declining with the drop in the country’s foreign exchange reserves. This has inadvertently created an unofficial or black foreign exchange market to absorb the excess demand that cannot be met in the official market.

Based on a political economy analysis of feasible reforms, this paper puts forward the following recommendations to address some of these issues: