From dysfunctional to functional corruption: The politics of reform in Lebanon’s electricity sector

Corruption in the electricity sector has been a major constraint to economic and social progress in many countries. In Lebanon, the electricity sector’s dysfunction and inefficiency mask deeper political economy challenges, including rampant rent-seeking, captured institutions and a fractured state. Over decades, corruption and mismanagement in Lebanon’s electricity sector has contributed to the draining of public finances and has deprived the Lebanese people of their right to reliable and affordable electricity. When Lebanon witnessed an uprising in October 2019, electricity (or the lack thereof) was a focal point of public grievance and it remains a central concern amidst the economic crisis that the country currently faces. 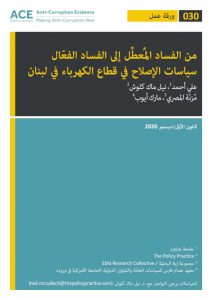 Lebanon’s electricity performance is dismal. The state utility – Électricité du Liban (EDL) – covers only 63% of electricity demand, which results in rotating outages. These last longer as one moves away from Beirut’s central district, thus widening social and developmental inequalities. There are also high technical and non-technical losses in power, together amounting to a third of EDL’s total generation. Tariffs have not been adjusted since 1994, and consequently EDL makes huge losses – more than half of all of Lebanon’s national debt stems from losses accrued by EDL.

One consequence of this dysfunction has been the emergence of tens of thousands of private diesel generators which provide power to households and businesses when EDL power is not available. This informal, illegal and, until recently, unregulated scattering of private generators provides a variable, high-cost and often low-quality service. In many places, generator owners are regarded as a ‘mafia’ that is both part of, and contributors to, the political patronage system in Lebanon.

Amidst the poor general state of the sector, one area of Lebanon has managed to operate a private utility that provides a reliable and high-quality electricity service – Électricité de Zahlé (EDZ) – which covers the city of Zahle and 16 surrounding villages. EDZ’s technical losses stand at only 5%; it collects 100% of bills and is profitable while providing electricity at an overall cost no higher than that paid by households reliant on private generators to back up EDL’s supply.

Our study explores how it has been possible to establish EDZ’s functional, but problematic, service provision within the complex sectarian political context of Lebanon. We draw on a framework provided by Khan et al. (2019) to understand the rents and types of corruption in the sector and how the changes implemented by EDZ have been consistent with the nature of Lebanon’s political settlement.