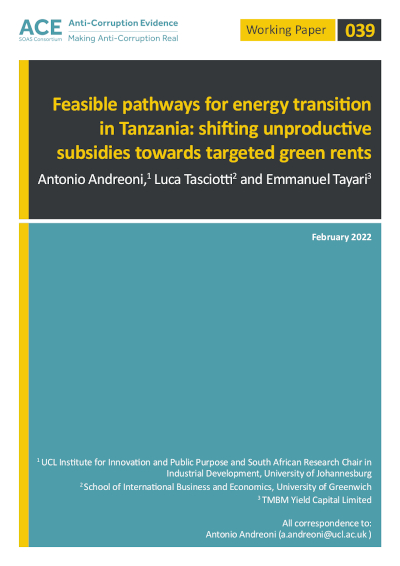 Tanzania’s energy sector is at a crossroads. After almost two decades punctuated by corruption scandals and increasing financial unsustainability of the country’s state-owned public utility the Tanzania Electricity Supply Company (TANESCO), the government needs a new approach to honour its political commitment to affordable energy access. However, despite the ambitious pipeline of new energy generation plans, progress remains slow and several challenges remain. First, the governance and financial sustainability of TANESCO is still very precarious, and the most recent estimates confirm a cumulated debt of over US$600 million. Second, the overall management and maintenance of the energy generation and transmission infrastructure is far from efficient and presents several bottlenecks, with significant impact on energy reliability, power losses and need for government subsidies. Third, the energy technology mix has not diversified at a sustained rate, and this has exposed the overall energy infrastructure to various vulnerabilities. Due to traditional dependence on hydropower, droughts have resulted in extensive power supply shortages and interruptions.

Against this backdrop, this paper identifies feasible pathways for energy transition in Tanzania that allow for an incremental improvement in the financial position of TANESCO and that creates windows of opportunities for targeted substitution of the most costineffective power plants with a combination of on-grid and off-grid renewable technologies. We conduct a political economy analysis of the factors contributing to the existing subsidised regime and highlight how this is highly vulnerable to several forms of corruption. Building on a newly built plant-level dataset that covers 31 energy plants throughout 2008–2017, we conduct an econometric analysis of the subsidy regime administered by TANESCO through its electricity buying decisions across several public- and private-owned plants. In Tanzania, in 2017 alone, at the end of the period considered in our econometric analysis, electricity subsidies amounted to 2.47% of total gross domestic product (GDP).

We find new econometric evidence that TANESCO’s buying decisions during this period did not always follow an efficiency buying criteria aimed at reducing costs and need for subsidies. On the contrary, it disproportionally allocated subsidies to a sub-group of power generation plants whose unit generation cost structure is relatively more expensive. The emerging evidence points to the existence of potential political reasons underpinning TANESCO’s buying decisions and overall arrangements with specific power generation plants. In some cases, these are due to direct and indirect opportunities for rents capture (for example, the running of industrial diesel plants in remote parts of the country), in others to purchasing power agreements (PPAs) with guaranteed capacity charges.

While the energy sector might need dramatic transformation, in the short-to-medium term an incremental anti-corruption approach would be to consider how to improve the performance of the sector, and in particular TANESCO. To do this, we show that it is critical to take into account differences in performance among power generation plants that are receiving either direct or indirect subsidies. The most feasible pathway that emerges to transform the energy sector is a two-pronged approach focusing on relatively shorter-term replacement of isolated plants with variable renewable energy (VRE) solutions off-grid or via mini-grids, alongside the unlocking of gas industry negotiations. This strategy would be consistent with the political commitment of the government towards increasing energy access, while retaining control of the public utility. Leveraging existing pressure to deliver affordable energy and expanding access, we show how a targeted approach which focuses on turning increasingly unproductive subsidies towards targeted instruments for scaling up VRE in remote parts of the country could be a viable solution. This is also compatible with a government commitment for centralised energy generation capacity and could offer the population multiple options for energy generation sources.