Exploring the nature, enabling factors and solutions to corruption in the procurement of pharmaceuticals in Nigeria tertiary health institutions: a qualitative study 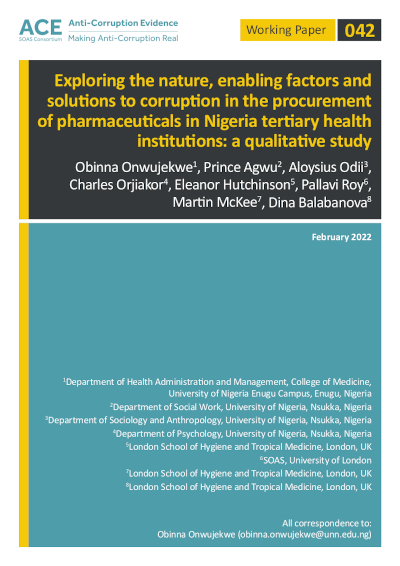 Pharmaceuticals account for a large share of health budgets, second only to salaries of the workforce in most countries. Coupled with the complexity of managing multiple product lines from different suppliers, frequently with potential for substitution, this creates huge opportunities for corruption, especially in countries where governance systems are weak. We have sought to understand the situation in Nigeria, a country known to face challenges in this area, and identify underlying factors and possible solutions.

Many respondents agreed that the procurement system in both hospitals was inefficient and corrupt, with everyone connected to the hospitals bearing the consequences, which included alarming economic, social and health impacts on patients. We confirmed the existence of various corrupt practices, including bribery and kickbacks, favouritism, nepotism and selective bidding. Although several national procurement guidelines exist in literature, procurement actors are rarely guided by them, hence the prevalence of discretionary decisions. Other drivers that encouraged corrupt practices include weak monitoring, poor pay, political influence, government policies, social and kinship influences, rivalry between doctors and pharmacists and pressure on pharmaceutical representatives to meet sales targets, among other systemic and structural inefficiencies. Proposals for action were largely without supporting evidence, but we found some potentially successful interventions.

Pharmaceutical procurement in these tertiary health institutions was widely considered to suffer from corruption, with dire consequences for the country’s health systems. However, an effective response will require changes at all levels of Nigerian society.