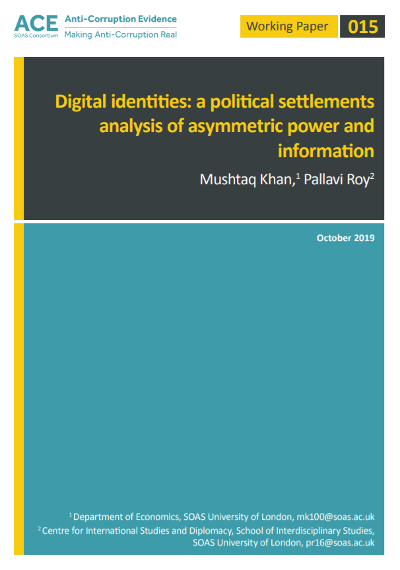 Digital identity systems are being enthusiastically adopted in Africa and Asia as a response to corruption, inefficient service delivery, high costs of doing business, and security threats. The expectation is that by establishing the identities of citizens and their entitlements and responsibilities, these systems will reduce the information asymmetries that allow rules to be violated. However, this assumes that developing countries have a rule of law that ensures that evidence on violations will lead to enforcement regardless of the identity and power of the violator.

Debates in the United Kingdom and other advanced countries have centred around appropriate regulation and have been driven by the concern that identity data linked to multiple databases can lead to a loss of privacy that is not justified by improvements in security. But when the rule of law is weak – such is often the case in developing countries –there is the additional possibility of a deliberate misuse of data by the powerful, leading to rent extraction or political exclusion of different types. These are qualitatively different concerns and require a different analytical frame for assessing the likely impact of digital identity systems.

In many developing countries we observe variants of rule by law, where enforcement has a higher likelihood of success when it benefits the more powerful party. In such contexts, reductions in the asymmetry of information achieved by digital identity systems can have anomalous effects, depending on the type of violation and the relative power of the parties involved. For some types of violations digital identity systems can have significant positive social effects, for example by mobilising the powerful to change rules in order to improve compliance and reduce fraud. However, for an important subset of violations, better information can strengthen the asymmetric power of extractive groups and support their ability to exclude and repress others further. Such systems can also contribute to economic exclusion through what we describe as the ‘premature formalisation’ of informal, small and medium-sized enterprises.

We develop an analytical framework to explain the anomalous effects of digital identity systems, reviewing the available literature on relevant systems in Asia and Africa. We consider the need for asymmetric power analysis alongside asymmetric information analysis to understand the causes of, and possible policy responses to, rule violations, and introduce the political settlements framework as a lens for understanding the differences between digital governance and data concerns in developed countries compared to advanced countries. The theory and evidence suggest that a more robust analysis, which recognises the interdependence of asymmetric information and power, can assist in the design of country-specific, welfare-enhancing digital strategies.