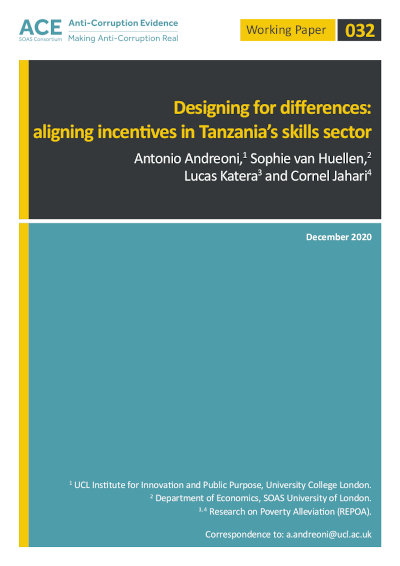 The existence of skills gaps and mismatches has been widely documented in several developing countries. Tanzania is no exception here. Highly subsidised vocational education and training (VET) programmes are used to address this challenge, which is social and political in nature as much as it is economical.

Since the introduction of the Skills Development Levy (SDL) in Tanzania, the financing of skills training has been contested. The private sector has raised concerns about the size of the levy and the usefulness of training provided by VET centres, and has accused the government of misallocation and misuse of the raised levy. Lack of transparency in the collection and allocation of the SDL and allegations of corruption including double taxation have been denounced. At the same time, the government has raised repeated concerns about lack of cooperation from the private sector in tackling the dramatic skills gap and youth unemployment, and has ramped up tax collection over the last five years. The government has historically experienced significant challenges in collecting taxes. Furthermore, firms have been accused of hiring foreign workers without work permits or so-called succession plans, a violation of the non-citizens employment act. This political economy of the SDL and Tanzania’s skills sector has resulted in significant mistrust between the public and the private sector. To unlock this, we conducted three Discrete Choice Experiments (DCEs) over a stratified sample of 209 Tanzanian firms, looking for evidence of a feasible strategy to bring about change. This strategy builds on the idea that successful alignment of incentive structures has to take into account the heterogeneities in skills needs and the capabilities of different types of firms.