Cheaper, cleaner power: De-risking as an anti-collusion strategy in Bangladesh 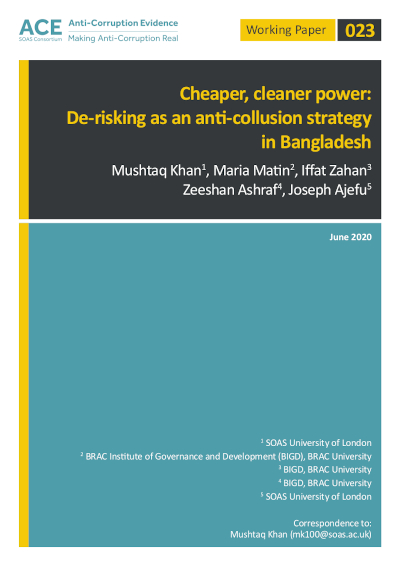 Collusive contracting with private power plants in Bangladesh has resulted in high power prices that cost the taxpayer around US$1 billion a year in subsidies, as well as the selection of environmentally damaging fuels and technologies. The overpriced plants are also prioritised in dispatch orders and fuel supplies, perhaps because their high mark-ups allow them to corruptly influence these decisions. A World Bank study of gas-fired plants in 2014 found that expensive plants received more orders than cheaper ones, costing the taxpayer US$1.4 billion through this misallocation alone. Other types of preferential treatment of privileged companies are also reported.

These problems emerged after 2010 as contracts began to be signed in closed-door negotiations between the government and individual investors. However, the suspension of competitive procurement rules and of transparency did not happen on a whim. The private sector delivered two of the lowest-priced power plants in Asia in the early 2000s in competitive tenders, but, later that decade, projects stopped attracting investors. At the heart of the problem was the perception of risk in contexts of weak contract enforcement. Private power investments involve large upfront outlays with costs and profits recovered over long periods. If the rule of law could be quickly improved, that would be a way to reduce risks. But otherwise, intermediate solutions have to be found.

To mitigate risks in high-risk contexts, governments have to provide subsidies to change incentives. The Bangladesh experience shows that risk-mitigation subsidies can have competitive effects, but other subsidies can support collusive outcomes. Competitive risk- mitigation subsidies reduce risks for all potential investors interested in a project. They attract competition and can reduce prices by much more than the value of the subsidy. They should arguably be regarded as public investments with a high social return rather than subsidies. The early projects in Bangladesh benefited from such subsidies, including preferential financing from international financial institutions (IFIs) and access to leased government land. Unfortunately, their significance was not understood. The subsidies were withdrawn and only partially reintroduced later. When they were withdrawn, investments dried up. To resolve a severe power crisis, the government resorted to a collusive risk-mitigation strategy, engaging in closed-door negotiations with single investors to mitigate their risks. This solved the investment problem but at a high cost and with much higher subsidies.

Versions of competitive risk-mitigation subsidies continued in a few projects. We use data from 58 private power plants in Bangladesh from 2008 to 2016 to show that even in an overall collusive environment, the provision of relatively small risk-mitigation subsidies resulted in a 62% reduction in plant-level prices in these projects, adjusting for fuel type, generation capacity and age. Our analysis of risk perceptions and potential competition provides a plausible explanation for this huge price effect.

The evidence and analysis suggest a feasible and effective anti-collusion strategy for the power sector. Given the powerful interests at play, we looked for and identified an instrument that is not opposed by powerful players and yet is effective in changing their behaviour. Our analysis also suggests that a full subsidy withdrawal strategy will not solve collusion and corruption problems in developing-country power sectors. In fact, the collusion problem emerged as a result of an untimely withdrawal of some subsidies.